Advertisement
Should you be allowed to use some of your superannuation to buy a house?

Can I use my super to buy a house?

While it’s not yet possible to withdraw your super savings to buy a house, independent body CEDA has recommended that Australians should be allowed to withdraw. It comes after reports that millennials are struggling to save up enough of a deposit to purchase their first home.

The Committee for Economic Development in Australia (CEDA) has called for a raft of changes to be made to Australia’s retirement policy – including proposals for Australians to be able to dip into their retirement savings to purchase a home.

The independent think tank’s pleas were made with the release of their latest report, The super challenge of retirement income policy.

In the report, CEDA states that the government should recognise the role of owning your home in preventing and alleviating poverty in old age. It recommended that first home buyers be allowed to use super to buy their first home or to purchase owner-occupied housing.

CEDA chief executive Stephen Martin said that Australia’s ageing population and decreased housing affordability puts elderly people who do not own a home at risk of poverty. He says this means Australia’s retirement and housing systems require a rethink.

“We already know from CEDA’s report Addressing entrenched disadvantage in Australia, released in April this year, that between 1 and 1.5 million Australians live in poverty and the elderly, particularly those who do not own their home, are an at-risk group,” Prof Martin said.

“In fact, the overall poverty rate of older people in Australia is three times the OECD average, and one of the highest.

“Without a significant policy overhaul, that number is likely to significantly rise over the next 40 years.”

With first home ownership rates continuing to decline, especially among younger households aged 25 to 44 years, the report also states that this fall in housing affordability will result in more people retiring without the security of their own home.

And what’s more, first home buyers who do manage to scrape together a deposit face such high house prices that 1 in 3 are seriously worried about repaying that debt.

It is suggested that allowing people early access to their super could help alleviate this issue, but not everyone agrees it’s a good idea.

The Association of Superannuation Funds of Australia (ASFA) revealed their concerns about the CEDA recommendation soon after the release of the report.

ASFA CEO Pauline Vamos said policies increasing the capacity for individuals to pay for housing can actually have the effect of driving up house prices and eroding any positive impact on housing affordability.

“Allowing people to access their superannuation to buy a house will have a significant negative impact on the retirement incomes of those who choose to take this option, as well as potentially increasing the cost burden on all other members who would have to pay for it,” she said.

“While those who rent do require higher incomes in retirement, using superannuation to fund house purchases is merely reducing one asset to pay for another.”

The Self Managed Super Fund (SMSF) Association also took issue with CEDA’s suggestion, with its Association CEO/Managing Director Andrea Slattery saying it fundamentally undermines the core objective of the super system – to provide income in retirement.

“We recognise the importance of secure housing in retirement, but the Association strongly believes that super savings should be retained for the sole purpose of providing retirement income, and housing policy challenges should not be solved through the use of retirement savings,” she said.

“It is critically important to ensure that super balances early in a person’s life cycle are protected so they can benefit from compounding investment returns over time.”

Related article: Important things to know about your super

“Personally, I support the idea that first home buyers should be able to access at least some of their super to buy a home to live in. And I think it’s hypocritical of those who criticise the idea then turn around and support the current arrangement of SMSF trustees being able to invest in residential property and managed super funds being able to invest in residential property.

According to the most recent ATO statistics, SMSFs currently hold just over $24.4 billion in residential real property.

That, combined with negative gearing, rising house prices, and a few other things that the government seems unwilling to tackle, is making it increasingly difficult for first home buyers to get a foot in the front door.

In contrast, there’s comparatively little outcry over the hit that primary carers take to their superannuation when they have to take parental leave. Superannuation contributions are not part of the current government parental leave scheme, and certainly employers aren’t required to pay super guarantee contributions for someone on unpaid leave. So this leaves primary carers in the precarious position of being left behind in their current incomes, as well as their super account for retirement.

Read more articles by Justine Davies – Canstar’s Editor-In-Chief or read more about her views on using super to buy a first home.

What might the cost be of using super to buy a first home?

It’s impossible to accurately predict the cost of using super to buy a first home, as it depends on so many variables. However, for illustrative purposes, let’s look at a hypothetical example of someone who starts full-time work at age 23 on $55,000/year and receives a 9.5% super contribution into a fund that earns 7% net of fees. At age 60, they might have around $828,000 in their superannuation fund.

Let’s say, though, that using that $25,000 helped them to avoid Lenders Mortgage Insurance, got them in to a property a year sooner (so they were saving on rent), and reduced the size of their home loan by $25,000. Those things could potentially save them more than $100,000 over the life of their home loan, all other things being equal.

Kiwis CAN access their retirement savings to buy houses!

Across the Tasman in New Zealand, first home buyers are able to withdraw their retirement savings through their KiwiSaver accounts to buy a home.

For the unaware, KiwiSaver is New Zealand’s retirement savings initiative. First home buyers who have had a KiwiSaver account for at least three years are able to withdraw up to a certain amount, provided they leave a minimum balance of $1,000 behind.

It’s becoming a popular option, with ANZ revealing in February 2015 that 3,890 customers made a first home withdrawal from their ANZ KiwiSaver accounts in 2014 – up from 1,248 withdrawals in 2012.

ANZ also surveyed 850 KiwiSaver members who intend to purchase their first home in the next decade, and found that 89% of them planned to make a first home withdrawal from their KiwiSaver fund.

ANZ Wealth Managing Director John Body said the survey demonstrated that most New Zealanders included the purchase of a family home as part of their overall retirement planning.

“The survey found that 82% of people believe they need to own their own home to set themselves up for a comfortable retirement,” he said.

Related Article: It’s my money and I want it

Should Aussies be allowed to use super to buy a first home?

So should Australian first home buyers be able to use their super to buy a house? If implemented, it would probably be a popular option, as our counterparts in New Zealand are demonstrating.

As for how well it would address the issue of housing affordability and elderly poverty, it’s hard to tell. Some believe it would be counter-productive and drive house prices up even further, while drastically reducing the retirement incomes of those who choose to make the early withdrawal.

Nevertheless, allowing access to superannuation for buying a first-home is an interesting proposition.

In the meantime, you can use our Home Loan Calculator – Borrowing Power to get an idea of how much banks would currently be willing to lend to you.

Read more tips for First Home Buyers on our website.

Why I’m stressed about property prices

For a comparison insight on superannuation, the comparison table below displays some of the products currently available on Canstar’s database for Australians aged 30-39 with a balance of up to $55,000, sorted by Star Rating (highest to lowest), followed by company name (alphabetical). Use Canstar’s superannuation comparison selector to view a wider range of super funds. 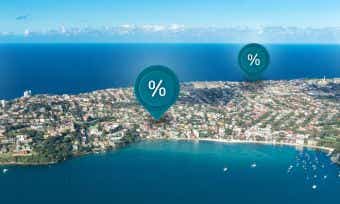