Advertisement
Did you catch a recent news article about Adelaide man Daniel King offering a “double your money” deal over a thirty-four year timeframe?

“You are bidding on a unique never before seen opportunity to purchase my Super when I retire at BC 3065 years old. 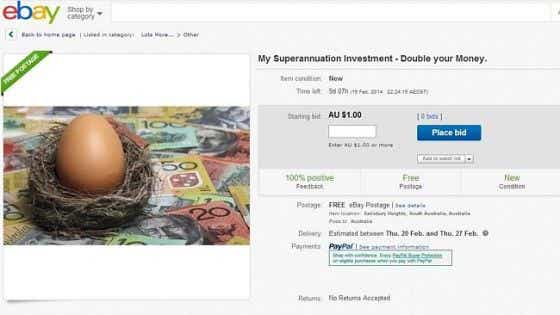 Is the deal worth it?

The problem is, it’s a pretty dud deal!

A far more simple option for investors might be to invest that potentially winning bid into their own superannuation fund; unlike buying something on eBay, there are significant tax advantages for most workers in paying money into their own super fund – particularly if the money is contributed as a salary sacrifice.

So for someone on the average income tax rate of 32.5%, for example, a $10,000 salary sacrifice into superannuation can net a tax saving of around $1,750. And once the money is in your fund, savvy investors should very easily expect to more than double the amount over a thirty-four year period.

Comparing a $50,000 winning bid on eBay with a $50,000 personal (after tax) contribution into your own superannuation fund, Canstar calculates the following outcomes at a modest earning rate of 6% net per annum:

Of course the final outcome will depend on the average yearly return and the fees charged by your individual super fund, but perhaps the most important part of the eBay advertisement is to act as a wake-up call for the many workers who take little or no interest in the performance of their super fund! So for readers of the original story thinking: ‘hey, doubling my money sounds good’, the message is look after your current super fund and try some online calculators to work out just how much you could potentially end up with at retirement. You might get a nice surprise!